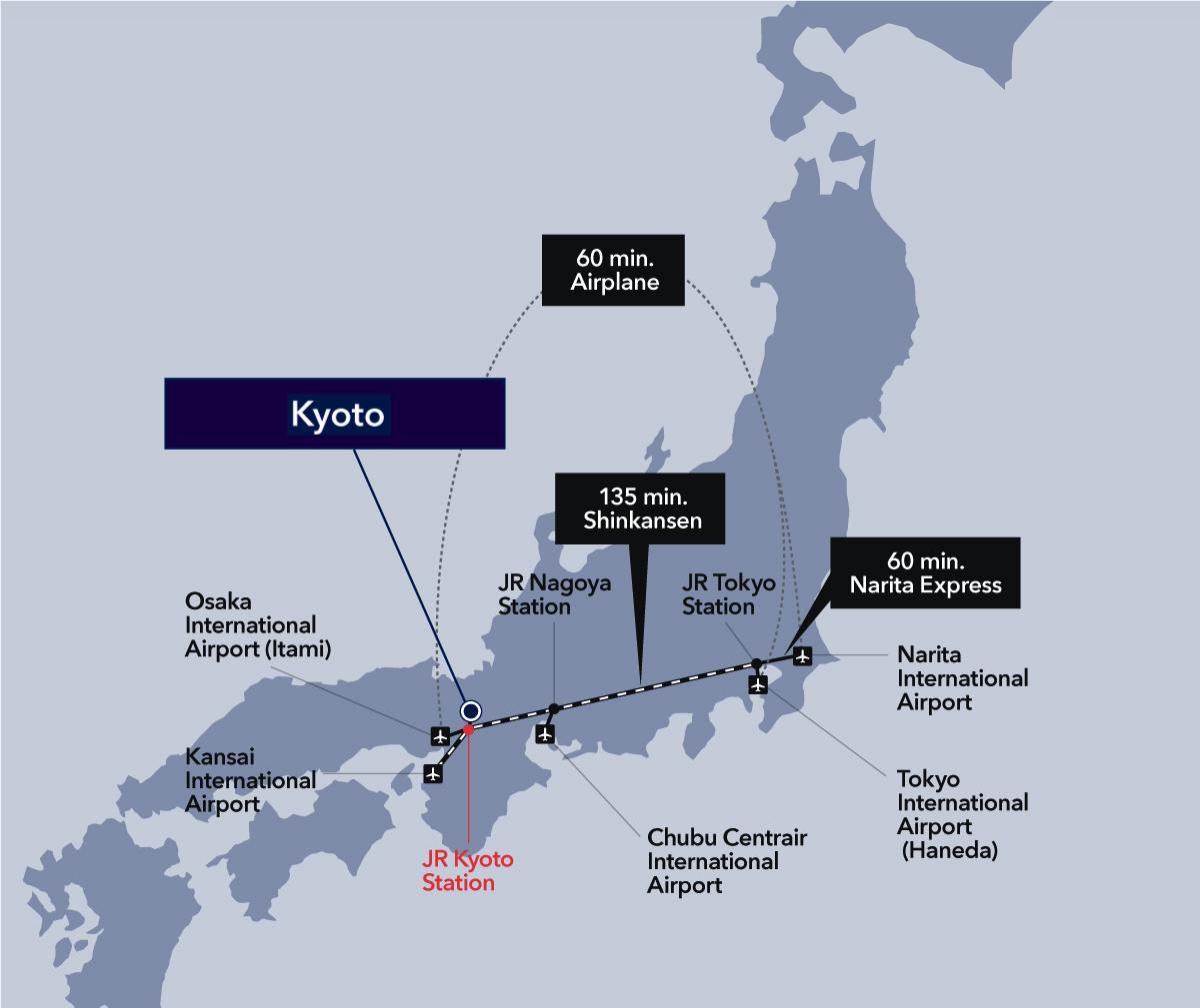 There are three airports with easy access to Kyoto (listed in order of convenience to Kyoto) as you can see in Kyoto airports map: Osaka International Airport (Itami; ITM): The closest airport to Kyoto – 50 minutes by convenient airport limousine bus. Serves mostly domestic flights (many airlines will fly you here free from Narita if you fly with them internationally). Kansai International Airport (KIX): The main international access point to Kyoto – about 90 minutes from Kyoto by direct express train. Central Japan International Airport (Centrair; NGO): less than 90 minutes from Kyoto by airport express and shinkansen. See also the note below about flying into Tokyo (Narita or Haneda) – in certain circumstances, it may be easier to do this. Each of these airports has its own transport options for getting to Kyoto from the airport (and, of course, getting from Kyoto to the airport).

Kansai International Airport is the major regional airport near Kyoto, with both domestic and international services as its shown in Kyoto airports map. Most people traveling directly to Kyoto from overseas will use Kansai Airport as the airport has international flights to and from locations in Asia, Europe, North America, Australia, and New Zealand. The fastest and most comfortable way to travel between Kansai Airport and Kyoto is by using the Limited Express Haruka which is operated by JR West. This train takes around 75 minutes to reach Kyoto Station and costs 2,850 yen. The Haruka departs from Platform 4 at Kansai Airport Station which can be accessed via the 2nd floor of the Terminal 1 building. Tickets can be booked on the day, and there are around 30 daily services.

Chubu Centrair International Airport (or just “Centrair”) is a major airport in central Japan, with both international and domestic services as its mentioned in Kyoto airports map. The airport is located on an artificial island in Ise Bay which is 35 km south of Nagoya, and 97 km east of Kyoto. However, because of fast rail links it can still be a convenient access point for Kyoto. If there are cheaper flights to Centrair than to Kansai Airport, Centrair could be the better option. Centrair is linked to Nagoya Station by Meitetsu Railway μ Sky Limited Express (μ is pronounced myu) which takes just 28 minutes for a full fare of 1,230 yen. At Nagoya you can transfer to the JR Tokaido Shinkansen for Kyoto. 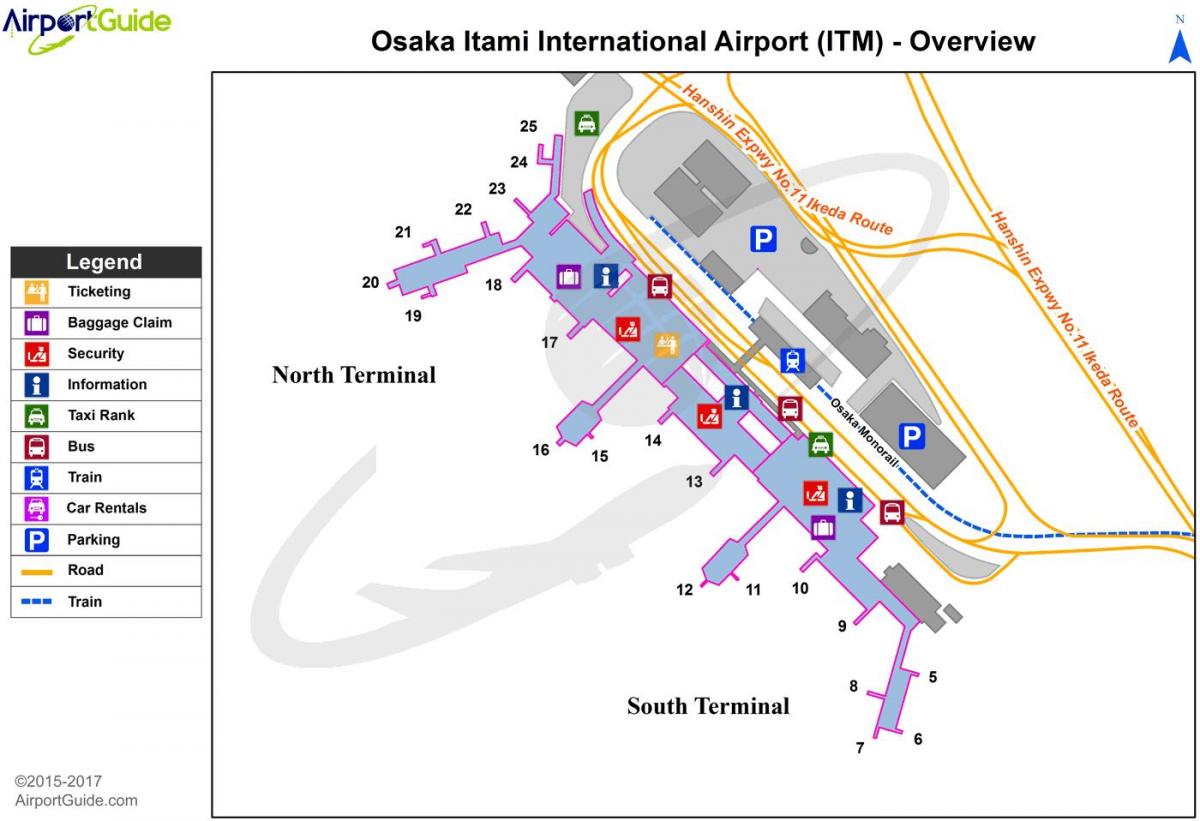 Osaka International Airport (大阪 国際 空港Ōsaka Kokusai Kūkō ) ( IATA : ITM , ICAO : RJOO ) is the primary domestic airport for the Kansai region of Japan , including the major cities of Osaka , Kyoto , and Kobe as you can see in Kyoto international airport map. It is classified as a first class airport. The airport is often called Itami Airport (伊丹 空港Itami Kūkō ) because most of its land is located in Itami , Hyōgo Prefecture. The terminal complex is located in Toyonaka , Osaka Prefecture , and the only access from the Itami side is via a long tunnel that passes below the runway and apron. Despite its "international" designation, the airport scheduled passenger air traffic is entirely domestic. Kansai International Airport (27 mi (43 km) away) took over Osaka international traffic in 1994 and competes with Itami for domestic traffic. Itami also faces competition from Kobe Airport (16 mi (26 km) away), a smaller domestic airport opened in 2006, nevertheless in FY2006 Itami was Japan 3rd busiest airport and the Kansai region busiest.

Itami Airport opened as the No. 2 Osaka Airport (第二 大阪 飛行 場Dai-ni Ōsaka Hikōjō ) in 1939. Prior to the opening of Itami, Osaka was served by seaplanes which used an airport at the mouth of the Kizu River as its shown in Kyoto international airport map. In 1931, the Osaka municipal government drafted plans to construct a new "No. 1 Osaka Airport" near the mouth of the Yamato River, also targeted at seaplanes, but concerns about fog and protests from Kobe-based businesses led the government to build the "No. 2 Airport" for land-based aircraft instead. The new airport was primarily used by the Imperial Japanese Army during its early years. US occupation forces took over Osaka Airport after the end of World War II in 1945, renaming it Itami Air Base. In 1954, Marilyn Monroe and Joe DiMaggio stopped at Itami during their honeymoon, and in 1956, the base was used in the filming of the movie Sayonara. Itami was renamed Osaka Airport (大阪 空港Ōsaka Kūkō ) following its return to Japanese control in 1958, and officially became an international airport in 1959.

The only international passenger flights to use Itami since 1994 have been in connection with state visits as its mentioned in Kyoto international airport map. Air Force One visited Itami in November 2005, and Chinese premier Wen Jiabao landed at Itami in April 2007. All Nippon Airways retains a large maintenance base at Itami which occasionally services aircraft ferried in from overseas without passengers, and some international cargo flights continue to use the airport as well. The Japanese government has taken further moves to limit operations at Itami in order to spur development at Kansai and Kobe. Aircraft with more than two engines were banned from Itami effective April 2006. The government proposed changing Itami status from first-class airport to second-class airport, which would saddle local governments with one-third of its operating costs; after protests from the surrounding local authorities, the national government withdrew this proposal. The government also proposed banning widebody aircraft from Itami, although this proposal was criticized as unrealistic given the volume of traffic there.