You can find on this page the Kyoto metro map to print and to download in PDF. The Kyoto metro map presents the network, zones, stations and different lines of the metro of Kyoto in Kansai - Japan.
The metro ticket prices range from ¥210 to ¥350 for adults and ¥110 to ¥180 for children (see Kyoto metro map). The trains of the Kyoto metro system are not covered under your Japan Rail Pass. 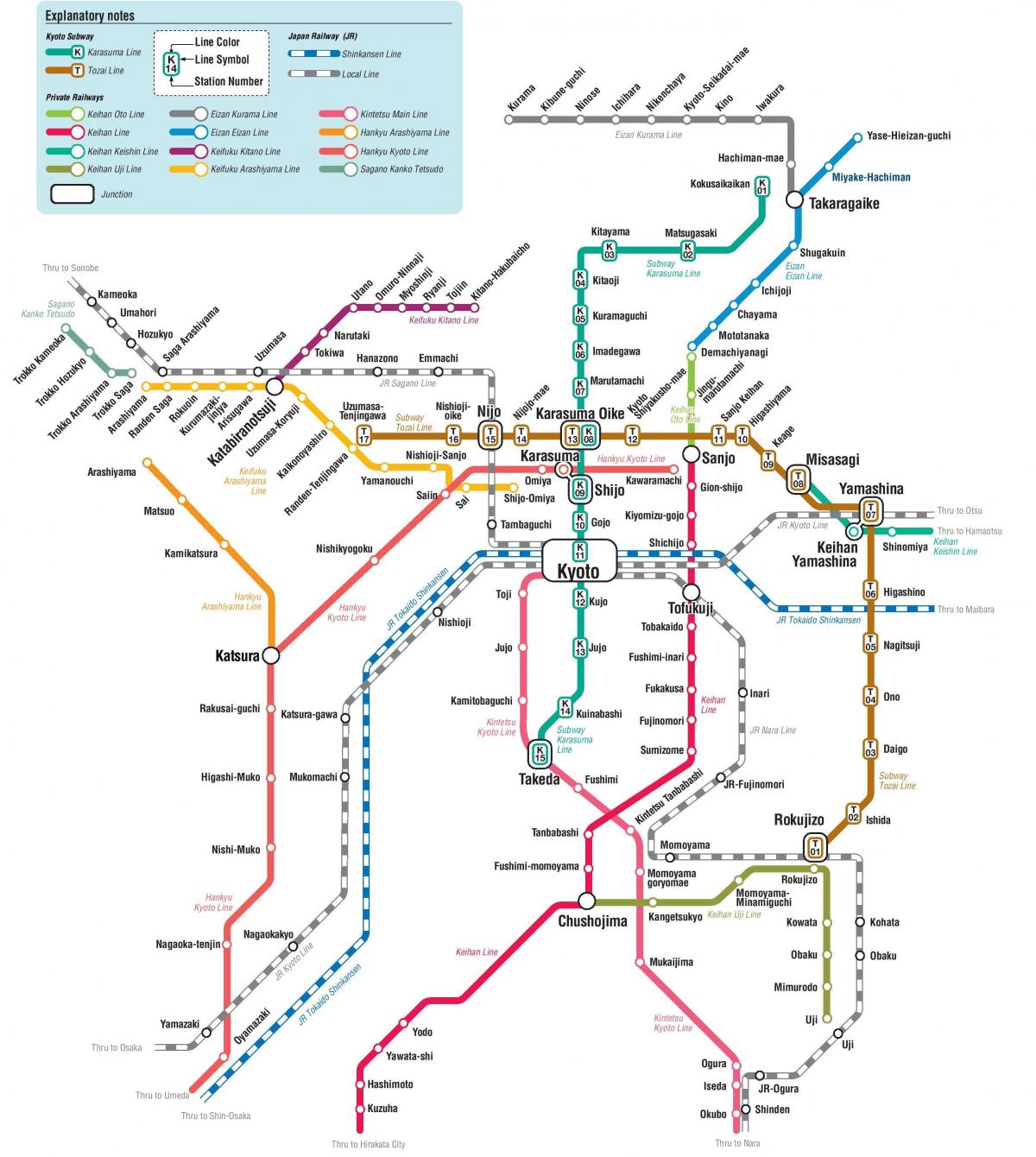 Kyoto metro is useful for visiting such places as central Kyoto, the Gosho Imperial Palace (Marutamachi Station), Toji Temple (Kujo Station), Daitokuji Temple (Kitaoji Station), Nijo Castle (Nijo Station) and Daigoji Temple (Daigo Station) but visitors will also need to utilize Kyoto buses, walk or hire a bicycle to get the most out of the city. The Karasuma Line was the first to be constructed in 1981 and now runs from Kokusaikaikan in the northern suburbs via Kyoto Station to Takeda in the south, where it connects with the Kintetsu Line to Nara as you can see in Kyoto metro map. The Tozai Line, first opened in 1997 and runs from Uzumasa-Tenjingawa from the west via Nijo Station to Rokujizo in the south east of Kyoto. The Keishin Line runs from Misasagi Station on the Tozai Line in Yamashina to Hamaotsu in Shiga. It is color coded in blue and white.

Although the areas that are covered by the Kyoto metro system are quite limited, the two lines do connect with other railway lines at various points along their routes. The combination of these various railway services actually makes up an extensive transportation network for the city. You can download a free PDF route map showing this complete network. Takeda Station links the Karasuma Subway Line with the Kintetsu Kyoto Line which connects Kyoto with the city of Nara as its shown in Kyoto metro map. Usually you will need to transfer between these lines but there are some through services between them. Rokujizo Station is the transfer point for the JR Nara Line and Keihan Uji Line. The Keihan Uji Line runs to Uji, a small city on the outskirts of Kyoto which is best known for its two UNESCO World Heritage Sites: the Byodoin Temple and Ujigami-jinja Shrine. 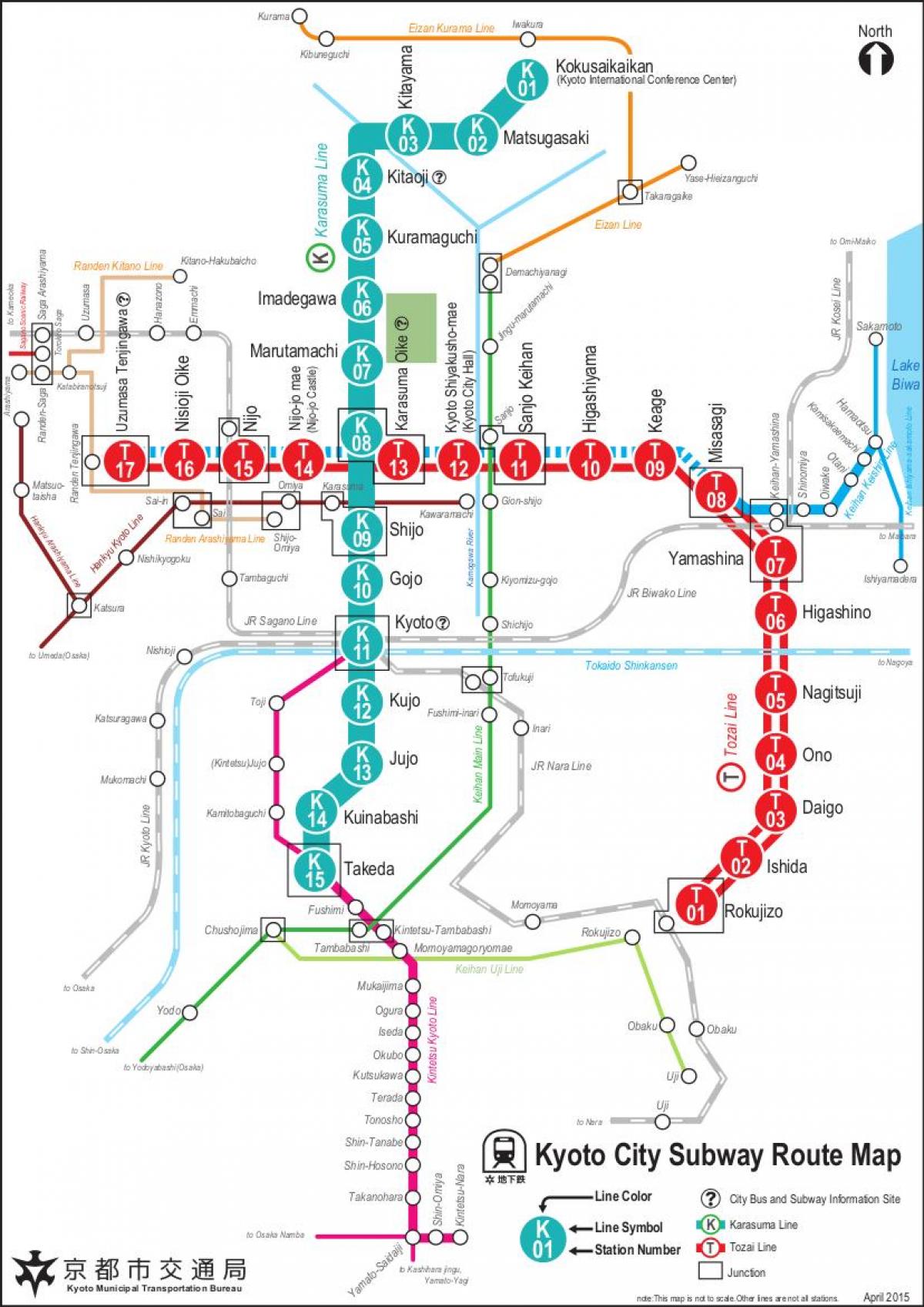 Kyoto Municipal Subway (京都市営地下鉄 Kyōto-shiei chikatetsu) is the metro network in the city of Kyoto, Japan. It is operated by Kyoto Municipal Transportation Bureau. It has two lines as you can see in Kyoto subway map. The Karasuma Line is colored green, and Its stations are Given numbers Following The letter K. The line has following stations, from north to south: Kokusaikaikan (terminal) and Matsugasaki in Sakyō-ku ; Kitayama and Kitaōji in Kita-ku ; Kuramaguchi and Imadegawa in Kamigyō-ku ; Marutamachi and Karasuma Oike in Nakagyō-ku ; Shijō , Gojō and Kyōto in Shimogyō-ku ; Kujō and Jūjō in Minami-ku ; and Kuinabashi andTakeda (terminal) in Fushimi-ku. Between Kitaōji and Jūjō , trains run beneath the north-south Karasuma Street ( ja: 烏丸 通Karasuma-dori) , Hence the name.

The Karasuma subway Line link to the other subway line, the Tozai Line , at Karasuma Oike as its shown in Kyoto subway map. They also connect to the JR lines at Kyoto Station and the Hankyu Kyoto Line running cross-town beneath Shijō Street at the intersection of Shijō Karasuma , Kyoto central business district . At Shijō Karasuma, the subway station is named Shijō , whereas Hankyu station is calledKarasuma. The Transportation Bureau and Kintetsu Corporation jointly operate through services, which continue to the Kintetsu Kyoto Line to Kintetsu Nara Station in Nara. The Karasuma Line and the Kintetsu Kyoto Line connect at Kyoto and Takeda . All the stations are located in the city proper.

The Tozai subway Line is colored vermilion, and Its stations are Given numbers Following the letter T as its mentioned in Kyoto subway map. This line runs from the southeastern area of ​​the city, then east to west (ie tōzai in Japanese) through the Kyoto downtown area where trains run beneath the three east-west streets: Sanjō Street ( ja: 三条 通Sanjō-dori) , Oike Street ( ja: 御 池 通Oike-dori ) And Oshikōji Street ( ja: 押 小 路通Oshikōji-dori). The line has following stations, from east to west: Rokujizō (terminal) in Uji ; Ishida and Daigo in Fushimi-ku ; Ono , Nagitsuji , Higashino , Yamashina and Misasagi in Yamashina-ku ; Keage , Higashiyama and Sanjō Keihan in Higashiyama-ku ; Kyoto Shiyakusho-mae , Karasuma Oike , Nijōjō-mae , Nijō and Nishiōji Oike inNakagyō-ku ; and Uzumasa Tenjingawa (terminal) in Ukyō-ku .