You can find on this page the Kyoto bike map to print and to download in PDF. The Kyoto bicycle map presents the bike routes and lanes of Kyoto in Kansai - Japan.
Kyoto regularly appears on lists of the world best bicycle cities and for good reason: it is a great place to explore by bike (see Kyoto bike map). It is flat, the weather is usually good for cycling, and drivers are relatively sane. 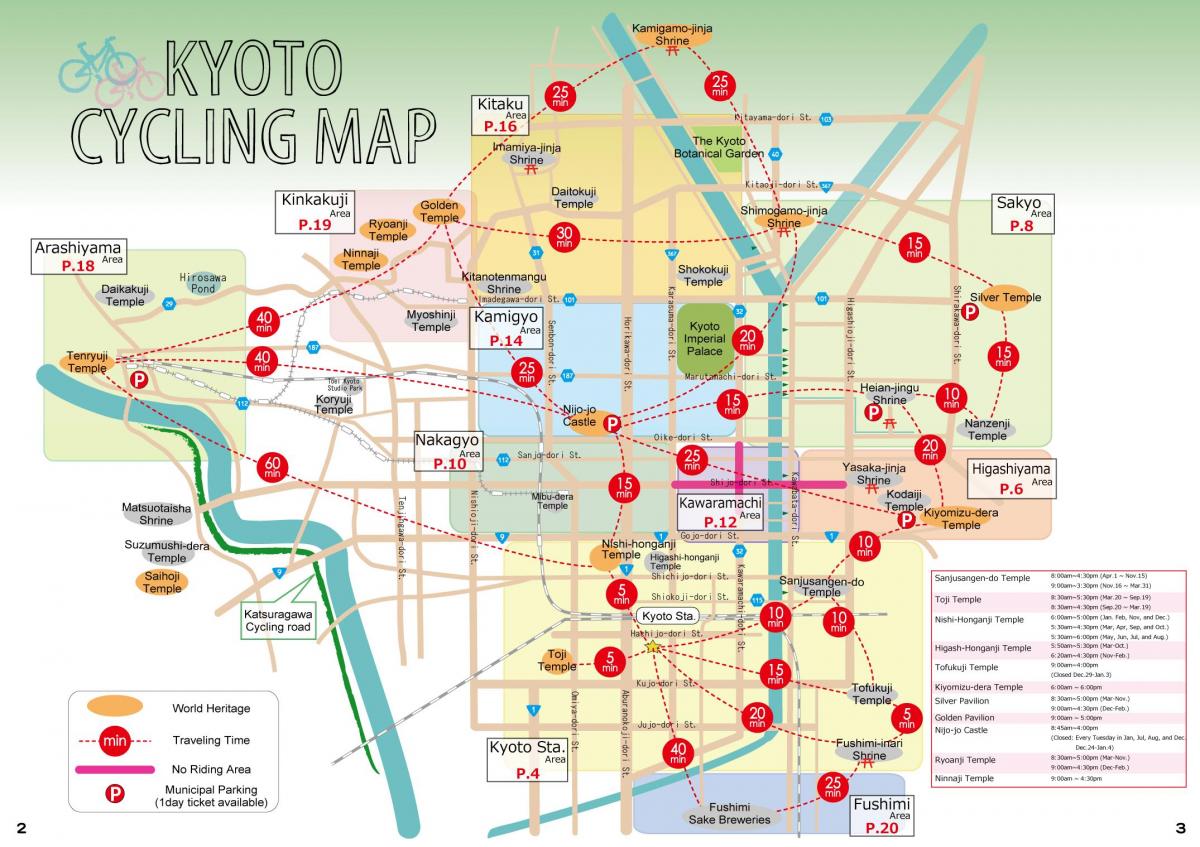 Bike north on Karasuma-dori, passing Kyoto Tower, until you get to Shichijo-dori, where you turn right (east). Cycle east to the Kamo-gawa and cross it on the bridge. Immediately after crossing the river, pick up your bicycle and walk down the steps to the excellent foot/bike path that runs along the river. Bike north all the way to Imadegawa-dori. Here, you will have to come up to surface roads. Take a left on Imadegawa and cross the bridge over the river heading west. Immediately after crossing the river, descend again to the bike path that runs along the west bank of the Kamo-gawa as you can see in Kyoto bike lane map. Take a right and ride north until you get to the bridge over Kitaoji-dori. Come up to street level, cross the river via the bridge and turn left. Kyoto Botanical Gardens will be on your right as you cycle north. To get home, simply retrace your route.

Many guesthouses hire or lend bicycles to their guests and there are also hire shops around Kyoto Station, in Arashiyama and in Downtown Kyoto. With a decent bicycle and a good map, you can easily make your way all around the city. Dedicated bicycle tours are also available. Bicycle helmets are only required to be worn by law by children 12 years and under. Note that cycling on the following streets is prohibited: Kawaramachi-dōri, between Oike-dōri and Bukkoji-dōri as its shown in Kyoto bike lane map. Shijo-dōri, between Higashioji-dōri and Karasuma-dōri. Sanjo-dōri, between Kiyamachi-dōri and Kawaramachi-dōri. For exploring the Northern Higashiyama area, check out Bicycle Rental EMUSICA, which is conveniently located right outside the Keihan Demachinayagi Station and with access to the river and sightseeing areas.

There are many great routes around Kyoto but we have put this 72km route together give cyclists a chance to escape the crowded tourist spots and find a little bit of isolation on these wonderful roads and paths through rolling hills, secluded forests and small rural villages when time almost stands still. Nature is on the doorstep in Kyoto and with a short 400 metre ride west along Shijodori (186) you will find yourself at Matsuo-Taisha and the entrance to the cycling path that leads to Arashimyama as its mentioned in Kyoto bike lane map. With both Natural and manicured beauty it is easy to see why Arashiyama is a popular tourist spot. Once at the junction in front of Seiryou Temple, turn right and follow route 29 east, paying attention to the small left then right turn at the first lights. Meandering through the green hills north of Kyoto route 162 passes through the villages of Umegahata as picks up the Omuro River and then Kiyotaki River at Takao.