You can find on this page the Kyoto streets map to print and to download in PDF. The Kyoto roads map presents the road network, main roads, routes and motorways of Kyoto in Kansai - Japan.
The streets of Kyoto run in an east/west and north/south direction (see Kyoto streets map), locals remember the various street names and use them like coordinates on a map to navigate the city. 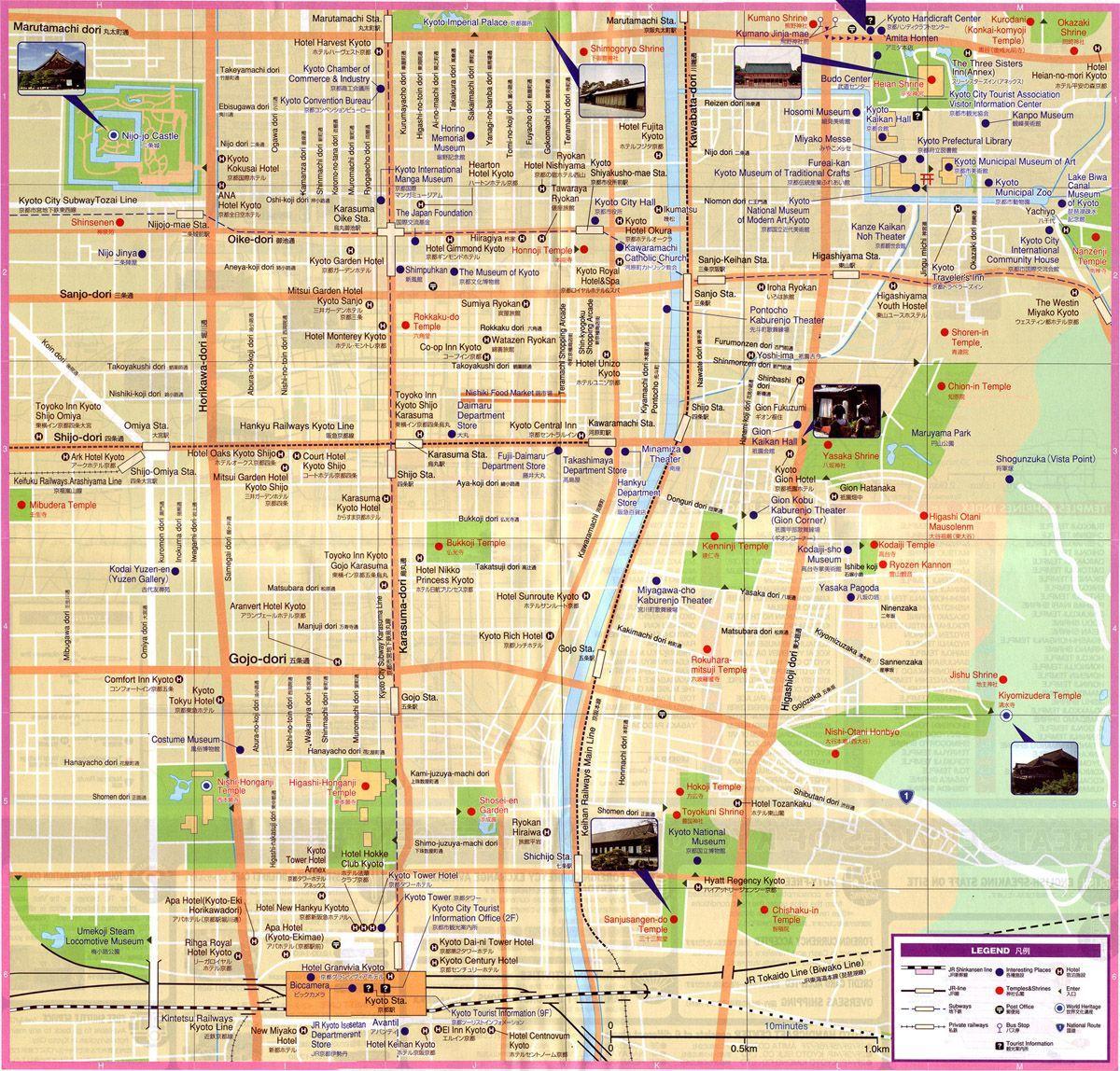 The original city of Kyoto was arranged in accordance with traditional Chinese feng shui following the model of the ancient Chinese capital of Chang'an (present-day Xi'an). The Imperial Palace faced south, resulting in Ukyō (the right sector of the capital) being on the west while Sakyō (the left sector) is on the east. The streets in the modern-day wards of Nakagyō, Shimogyō, and Kamigyō still follow a grid pattern as its mentioned in Kyoto streets map. Today, the main business district is located to the south of the old Imperial Palace, with the less-populated northern area retaining a far greener feel. Surrounding areas do not follow the same grid pattern as the center of the city, though streets throughout Kyoto share the distinction of having names.

You can navigate the streets of Kyoto using the the four cardinal directions or coordinate axis. The city center of Kyoto is almost like a Go chessboard, and every intersection looks and feels very similar. In the city center, the name of the intersections are formed from the names of intersecting north/south and east/west streets as you can see in Kyoto streets map. For example, if the name is Kawaramachi Sanjo, then it means you are at the intersection where Kawaramachi Street (Kawaramachi-dori) (north/south direction) meets Sanjo Street (Sanjo-dori) (east/west direction). Ebisugawa Street is famous for being a furniture street. The stretch between Karasuma Street (Karasumi-dori) and Teramachi Street (Teramachi-dori) features many furniture and home fitting shops. Bukkoji Street is much less crowded and has a serene atmosphere.

Sanjo Street as its shown in Kyoto streets map is popular for being a shopping street. The stretch between the Kawaramachi Street and Karasuma Street intersections is full of shops that stock sophisticated fashion-related goods and cafes, giving the area a unique atmosphere. Additionally, it houses the Kyoto Museum and many other buildings that have retro Western-style facades. Nishikikoji Street is a narrow street, but it is a famous sightseeing spot, as Nishiki Market (Nishiki Shijo) is located here. Nishiki Market is located in the stretch between Takakura Street (Takakura-dori), and it is also known as "Kyoto Kitchen". It is only about 3m wide, but features over 100 shops selling fruits and vegetables, fish, dried goods, side dishes and more. Shijo Street is the main street that runs through the heart of Kyoto city center. As one of the main shopping areas in Kyoto, it is particularly lively and packed with shops between Karasuma Street and Kawaramachi Street. Kawaramachi Street is another a major shopping street with comparatively newer shops, but Shijo Street is where many well-established department stores are concentrated. 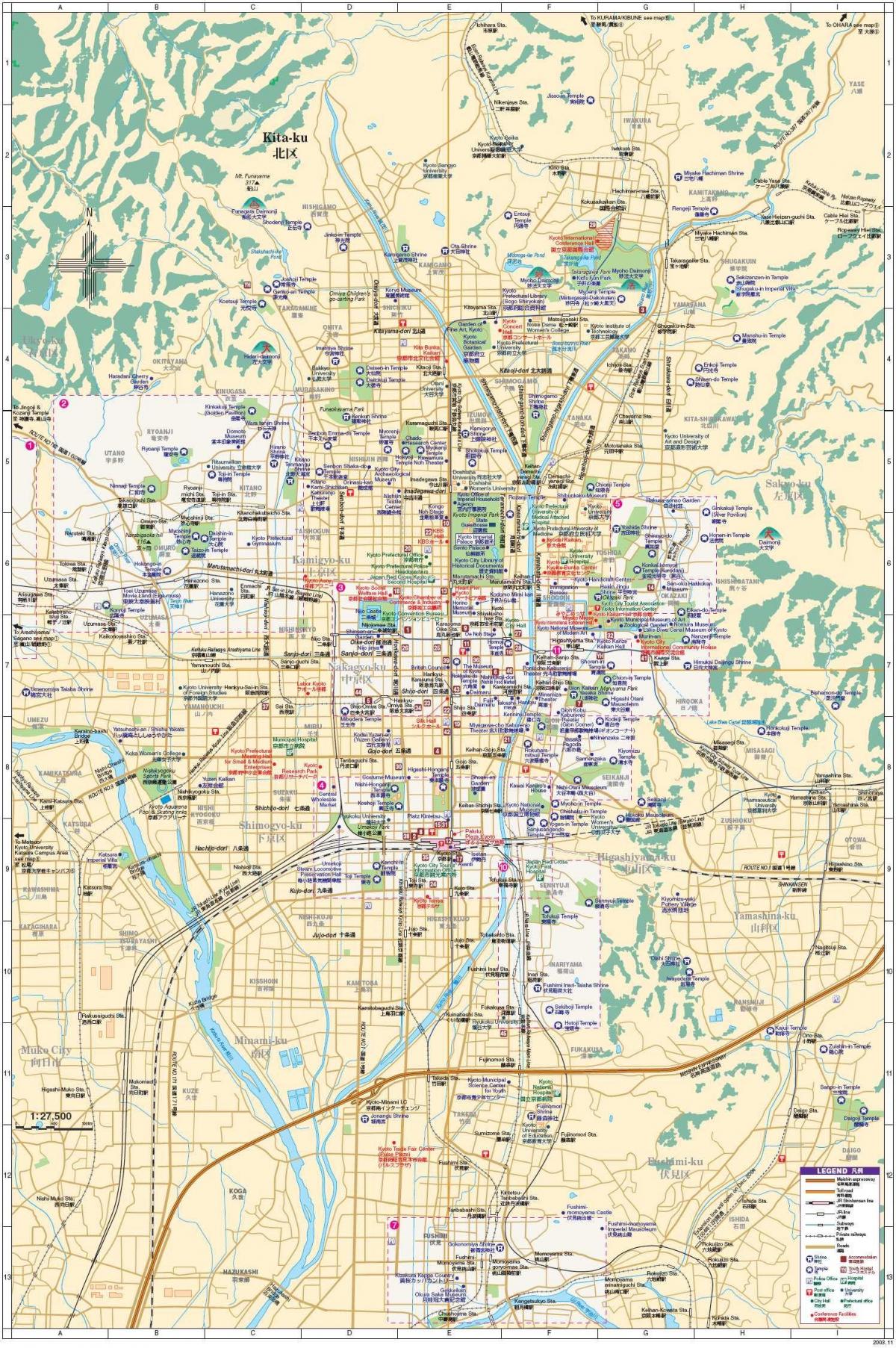 Kyoto city is connected with other part of Japan by the Meishin Expressway , which has two interchanges in the city: Kyoto Higashi (Kyoto East) in Yamashina-ku and Kyoto Minami (Kyoto South) in Fushimi-ku as you can see in Kyoto roads map. The Kyoto Jūkan Expressway ,which is approximately 100 km long, is an arterial high-standard highway (National Highway 478) extending from Kumiyama Town, Kuse-gun, Kyoto Prefecture to Miyazu City, Kyoto Prefecture. The expressway runs through the long, narrow Kyoto Prefecture from north to south, contributing to enhanced regional cooperation between north and south and the promotion of regional activation, and acts as a belt line in the southern urban areas of Kyoto City, which otherwise lack adequate high-standard road networks. Kyoto Governor describes this expressway as "Kyoto no Sebone," or the backbone of Kyoto.

The Daini-Keihan-Doro Bypass is a bypass of the general National Highway Road No. 1, which extends from Fushimi Ward in Kyoto City, Kyoto Prefecture, to Kadoma City in Osaka Prefecture as its shown in Kyoto roads map. It is comprised of four to six lanes of the exclusive section (expressway) and two to four lanes of the general section (general road) as side roads. The development of this bypass is being promoted in order to relieve congestion on the Keihan National Highway, whose traffic volume has exceeded its capacity, and on the section between the Suita Junction/Suita Interchange of the Kinki Jidoshado Expressway and the Kadoma Interchange (the Kinki Jidoshado Expressway). The Rakunan Renraku Road (local high-standard highway) is hereunder described collectively, because it is included in the service route of the Daini-Keihan-Doro Bypass as a general toll road.

Unlike other metropolitan cities of Japan, Kyoto has poor network of intra-city expressways. As of 2010, only 8.2 km of the Hanshin Expressway Kyoto Route is in operation. There are nine national highways in the city of Kyoto: Route 1, Route 8, Route 9, Route 24, Route 162, Route 171, Route 367, Route 477 and Route 478 as its mentioned in Kyoto roads map. The Hanshin Expressway (阪神高速道路) in Japanese is called Hanshin Kousoku-douro and runs through the cities of Osaka, Kobe and Kyoto for a total of 239 Kilometers. The route was inaugurated in 1962 connecting to several important routes in Kansai. Before we talk about the famous case of the highway that passes through a building, let's know a little about the highway and the routes with which it connects.