You can find on this page the Kyoto trains map to print and to download in PDF. The Kyoto trains map presents the rail network and railway stations of the trains of Kyoto in Kansai - Japan.
Kyoto trains are intended for intercity commuting, they all can be used to get around the city (see Kyoto train map). Trains are, however, faster and more comfortable than the bus service so it is better to take the train where possible. 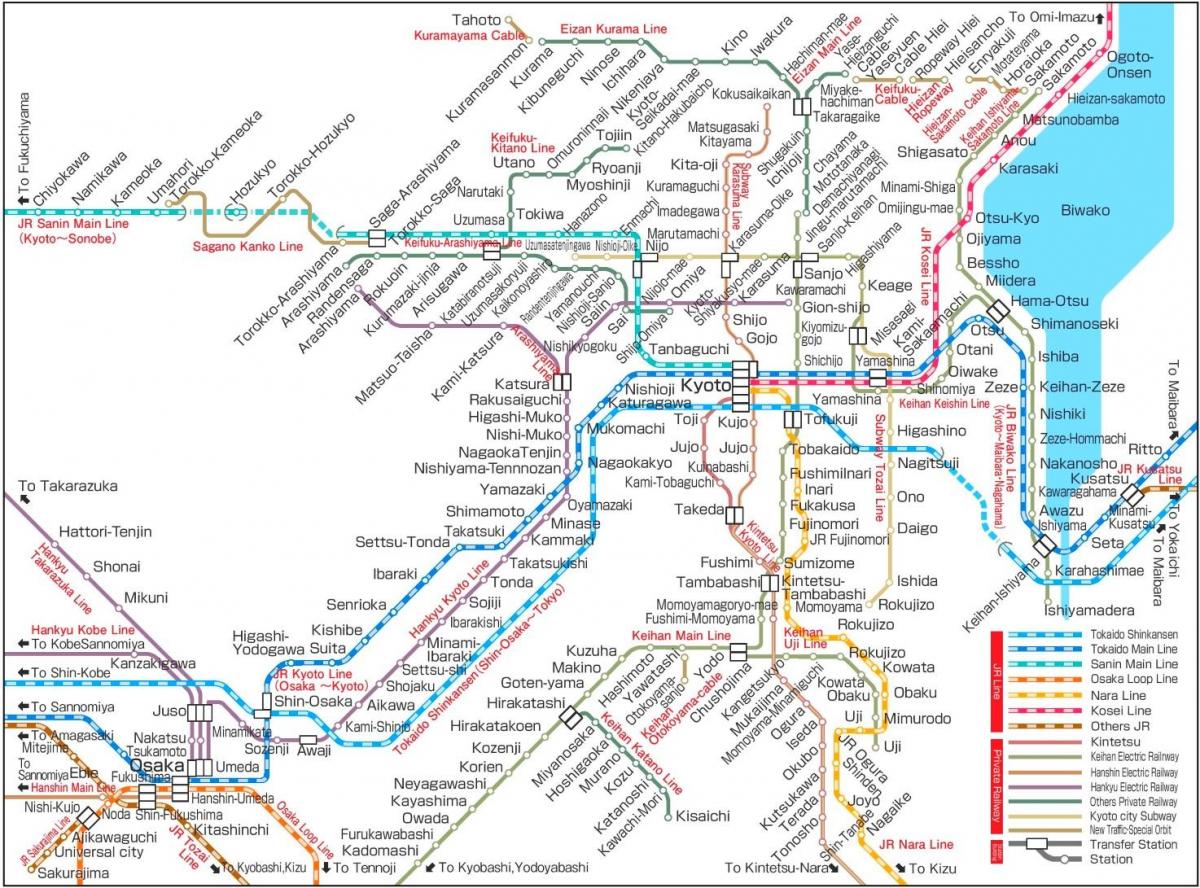 All JR lines including the Tokaido Shinkansen pass through or commence at JR Kyoto Station. JR trains are a good option for accessing the Arashiyama area (Sagano Line) and some attractions in southern Kyoto along the JR Nara Line, e.g. Fushimi Inari Shrine and Byodoin in Uji as you can see in Kyoto rail map. Hankyu Railway connects Kyoto with Osaka. The line initially runs below Shijo Avenue from Kawaramachi westwards in direction of Osaka. It is a good option for accessing the area around Katsura Rikyu, from where a branch line also connects to Arashiyama. Keifuku Railway (also known as Randen) operates two tram like train lines in northwestern Kyoto. For train lovers, a ride on these trains is a small attraction by itself. The lines can be an option for accessing Arashiyama and the area around Ryoanji and Kinkakuji.

Keihan Railway main line runs next and parallel to Kamo River, but unfortunately does not connect to Kyoto Station. The line continues to Osaka and is an alternative to the JR Nara Line to access some of the attractions in southern Kyoto as its shown in Kyoto rail map. Eizan Railway operates two train lines from where the Keihan Line ends, Demachi Yanagi Station in northern Kyoto. One line leads to Kurama, while the other runs to the base of Hieizan. Kintetsu Railway connects Kyoto Station to Nara. Note that some trains on the Karasuma Subway Line continue to run on the Kintetsu Nara Line, and the other way around.

A Japan Rail Pass is of limited use in Kyoto, so if you have one, do not activate it until your last day in the city. Many travellers get frustrated with how few trips they can make with the pass. The rail transportation system in Kyoto services mostly the city centre and is geared to commuters rather than tourists with few major sightseeing attractions located directly on the routes as its mentioned in Kyoto rail map. (Although many of the top places to stay in Kyoto are located close to subway stations). The railways in Kyoto are also operated by several different companies so ticket purchases and changeovers can get complicated.